How to Repair Beef Short Ribs

A number of years ago I was introduced to a book called "How to Repair Food." It was loaded with suggestions on fixing culinary mistakes. I thought it was cute at the time, but this past Monday I wished I had a copy of my own.

It was Memorial Day which meant John had the day off work. That alone was worth celebrating so I pulled out beef short ribs that I hoarded in my freezer for the last year and a half. Part of storing them so long was because I hated to not have them anymore and part of it was not knowing exactly how to prepare them. But anyone can follow a recipe and slam out some good cooking, right?

In this case, wrong. Very wrong.

I read about Texan-style preparation in which you smoke the ribs for hours. That sounded amazing but not having a good way of smoking ribs, I perused recipes until I came across one that looked delicious and fail-proof. It said to bake the ribs for two hours and grill them for twenty minutes, brushing them with your sauce every five minutes.

I had serious questions when I pulled the ribs from the oven after over two hours of baking. They seemed pretty tough but I hoped a little grilling might do the trick. It didn't. These ribs seemed unfazed by nearly three hours of heat. They were a challenge to my Cutco, not to mention my teeth.

The ribs reminded me of the kebab I purchased by leaning out of a bus window in Africa. The first bite took five miles of hard, determined chewing before I finally gave up and spit the thing discreetly into a tissue. I have never forgotten my five-mile-kebab and have laughed over it many times. Suddenly, thanks to tough short ribs, the humor was gone.

"Well, this might only be a three-mile bite," I said obnoxiously around a chunk of disappointment. But that might have been a too generous description.

Not surprisingly, there were leftovers. "Now what?" I asked, stabbing the hunk with vengeance. I imagined it getting tougher as it cooled and ending up as a teething toy for the neighbor dogs.

But the phrase "How to Repair Food" came to mind. I didn't know what the cookbook would say, but I figured there had to be a way to salvage these. . .things.

I think it was the leftover pineapple that sparked the saving inspiration. Alongside the meat, I had grilled fresh pineapple rings which had been marinated in honey and melted butter. They were amazing and if I hadn't been so disappointed over my carefully hoarded ribs being nearly inedible, I would have enjoyed them immensely.

Together with the sauce and the ribs, I added the pineapple and put it all in the Crockpot on Low. My initial instincts were to keep them there for the next week, roughly, but curiosity won and I lifted the lid after a single afternoon.

It had worked.  The leftover ribs were all I had dreamed of originally -maybe even better, thanks to the pineapple.

There really is a way to repair short ribs. In that case, anyone wanna come for dinner? (Hint: Ask for leftovers.)
Posted by Sara Nolt at 5:52 PM No comments: 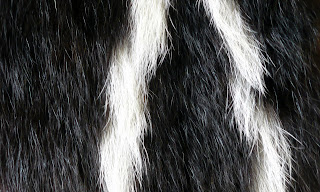 One question bothering me lately is: "What is God going to do with skunks when Christ returns?"  I can't imagine sharing divine real estate with little beggars who can't even stand their own scent.  Maybe God will "un-curse" skunks for eternity and give them Japanese Cherry Blossom to blast around instead of the wretched stuff they offer now.

I know I am particularly sensitive to this issue because of our basement.  It reeks.  Unfortunately, bad things don't always stay in our basement and the scent leaked upwards to permeate the rest of our house.  If it was a stench that lasted a few days and slowly got better, I think I might have wrinkled my nose and dealt with it.  But the stink ebbed and flowed like the tide, getting strong at bedtime and increasing to become horrible in the early hours of the morning.  We were awakened with it at 3:30 am and opened the window to air out our bedroom. The great outdoors smelled refreshingly clean.

"It smells fine outside," we said, disturbed that our house stank worse than a PA countryside.  That is when theorizing began.  "Are we sure it is a skunk?  Maybe there is a weird phenomenon going on underground and a gas is leaking up into our basement. Like methane, for example."

It sounded like a good theory to me in predawn drowsiness, but when I called my dad later that day to ask his opinion, he only said, "If it walks like a duck and looks like a duck, it probably is a duck."  That is a nice idea if this were ducks we are dealing with.

But I bought into his logic and took the children's to a friend's house for the morning to escape the smell.  We walked into her house only to be horrified when she said, "I can smell the skunk on you guys."

That was where my tolerance ended.  If it were just a rank outdoors to deal with, I would suffer in silence (well...possibly in relative silence).  And if it were only a stinky house, I might have been able to bite my tongue.  But stinky humans?  I called the landlord as soon as I got home.

I think it was when I saw him walk down our basement stairs with a pellet gun that I felt a surge of gladness I'm not the man of the house.  For the next hour he and his son snooped around in our crawl space and shone their flashlights into dark corners to try to find the skunk. They found none.  Not even under the back porch where they lifted a few floorboards to look underneath.

My brother was coming for the weekend, and I felt my privilege of hosting him was hanging on a slender thread about to be broken by a skunk dying in my house.  I decided to appeal to his sense of adventure with the following texts:

Me:  You won't want to miss out.  The landlord has a baited trap under our back porch.
Jordan:  Oh sweet!  This will be an exciting night!
Me:  Exactly.  Especially since your window is right above the porch.
Jordan:  Oh boy! Do you have a zip line to the nearest tree in case we get fumed?

It was a valid question.  A midnight blast from the skunk under our back porch would instantly render our house unbearable.

Me: Well, we've been discussing our options. Either we all end up on Dawn's living room floor or the nearest Comfort Inn.
Jordan:  If I hear a metallic click and the sound of a hairspray bottle losing its pressure, I'm completely abandoning ship!
Me:  Lol! So are we.  In fact, I told John that if this thing lets loose I am going back to IN with you for a week!

Turns out we didn't catch a skunk at all.  Through airing out the house for days, the scent slowly dissipated until it is moderately stinking up our basement but not wafting through the rest of the house.

"Too bad, really." I lamented aloud.  I was thinking of the trip to IN that was no longer pending.  Plus, I wouldn't have minded a trophy picture in my photo album. I saw the looks they trained on me and explained, "Hey, if I smelled like a skunk for a few days, I might as well have a picture of the culprit."

Jordan raised his eyebrows in disbelief. "I'd suggest you just print a skunk picture off of Google."

Yeah, he's probably right.  Must have inherited some of his dad's logic.
Posted by Sara Nolt at 10:52 AM 1 comment:

If your children enjoy artsy things, they might have fun with Fingerprint Drawing.  My just-turned-five year old has spent up to two hours at a time making pictures for me or his Grandmas.  He's basically been living outside in this gorgeous weather, but I'm keeping it in mind for rainy days.

Years ago, my mom gave me a multicolored ink pad and a fingerprint drawing idea book: 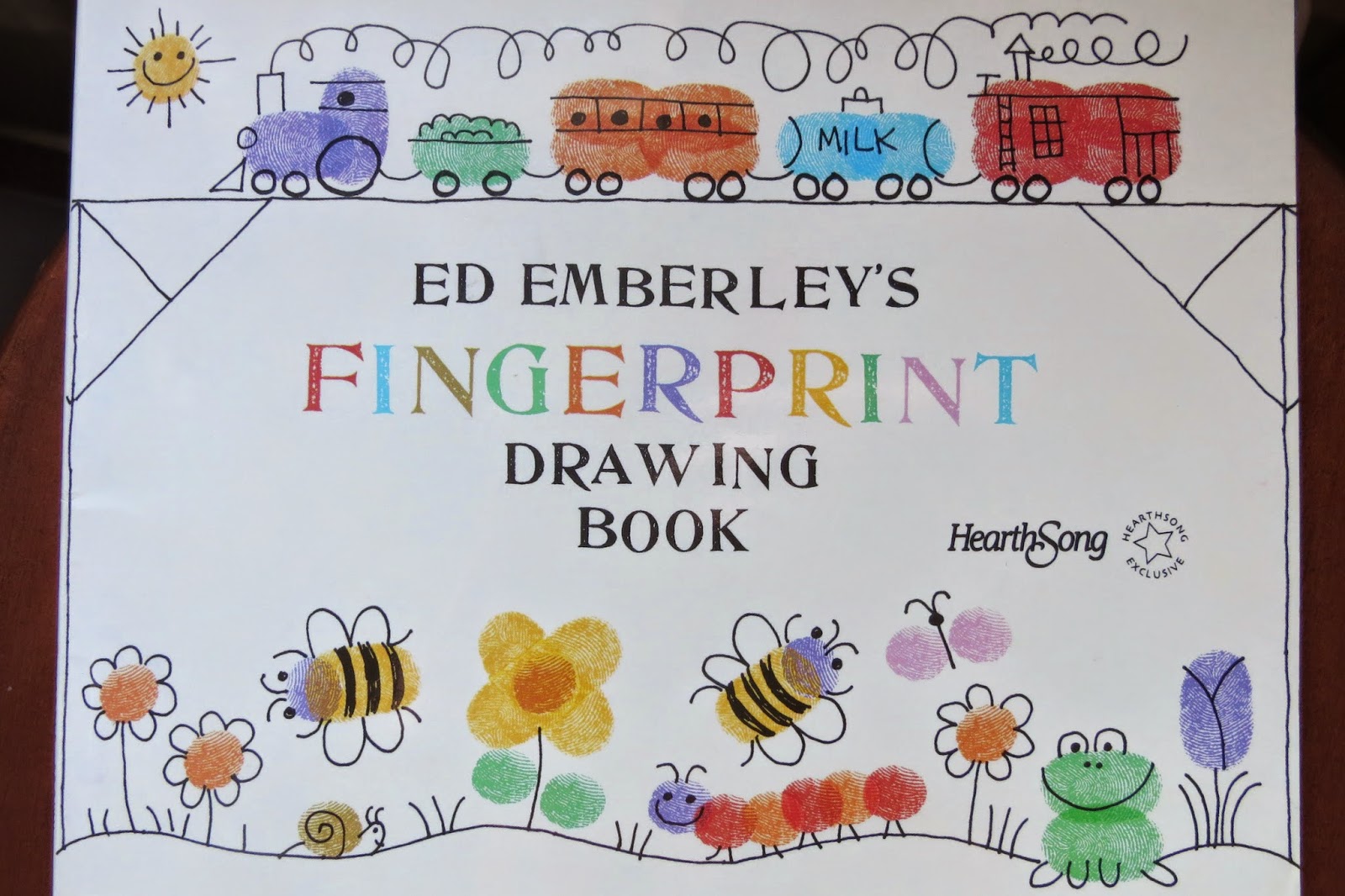 Surprisingly, the ink pad still works great, though there are a couple of colors that have been dirtied by little fingers. 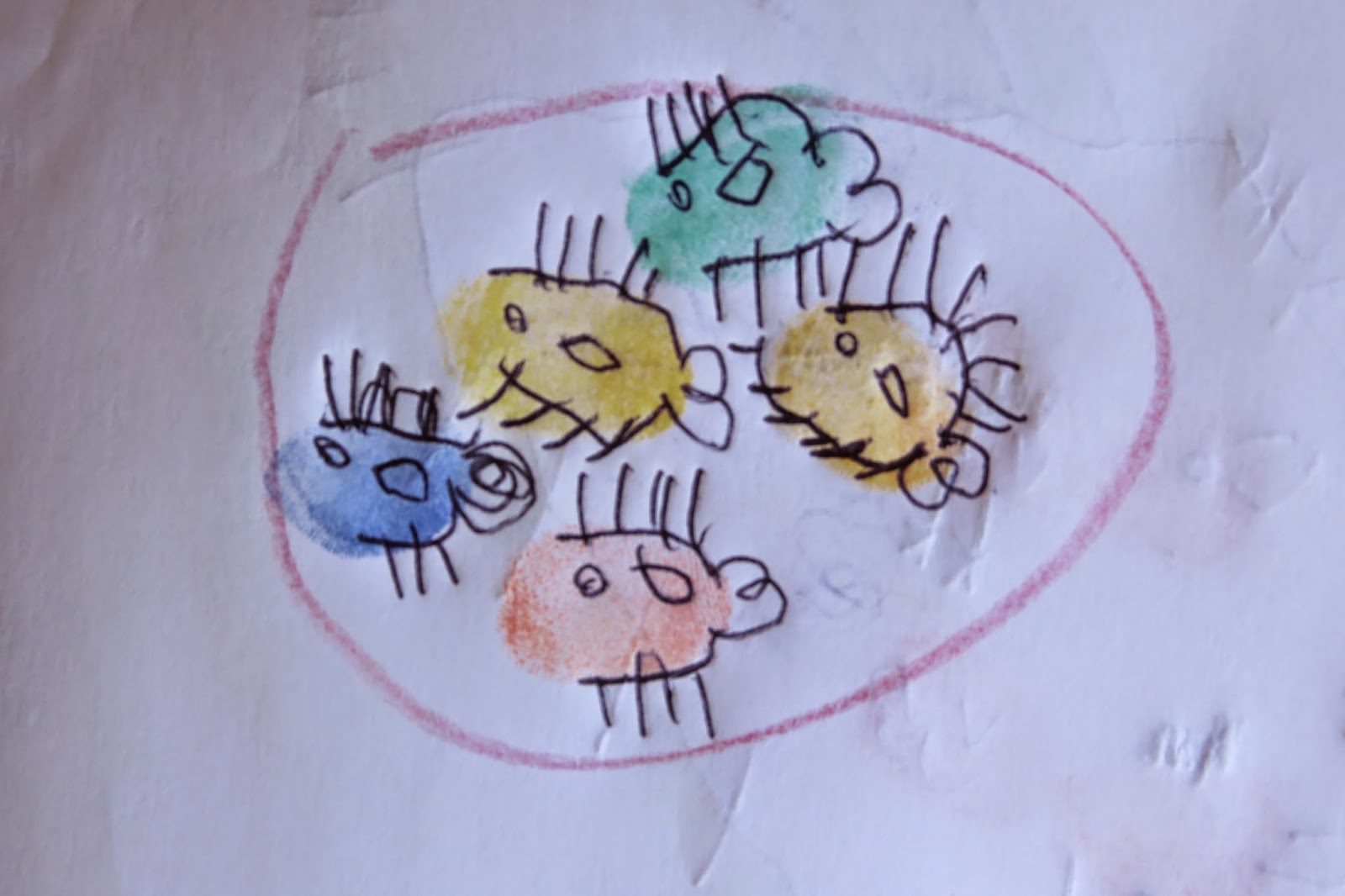 and divers, complete with snorkels and flippers: 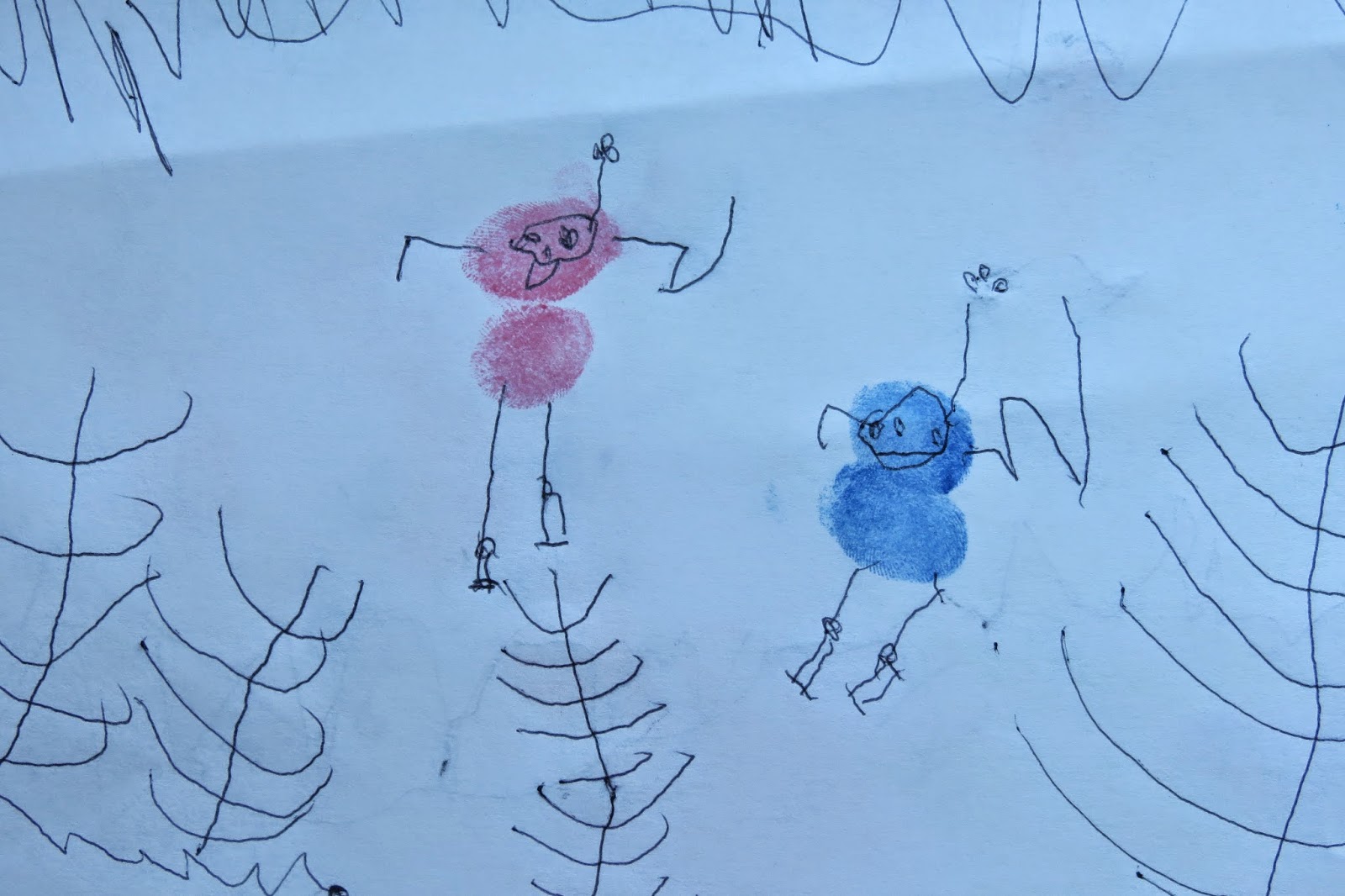 He has had an entire generation of butterflies captured by little people with butterfly nets. 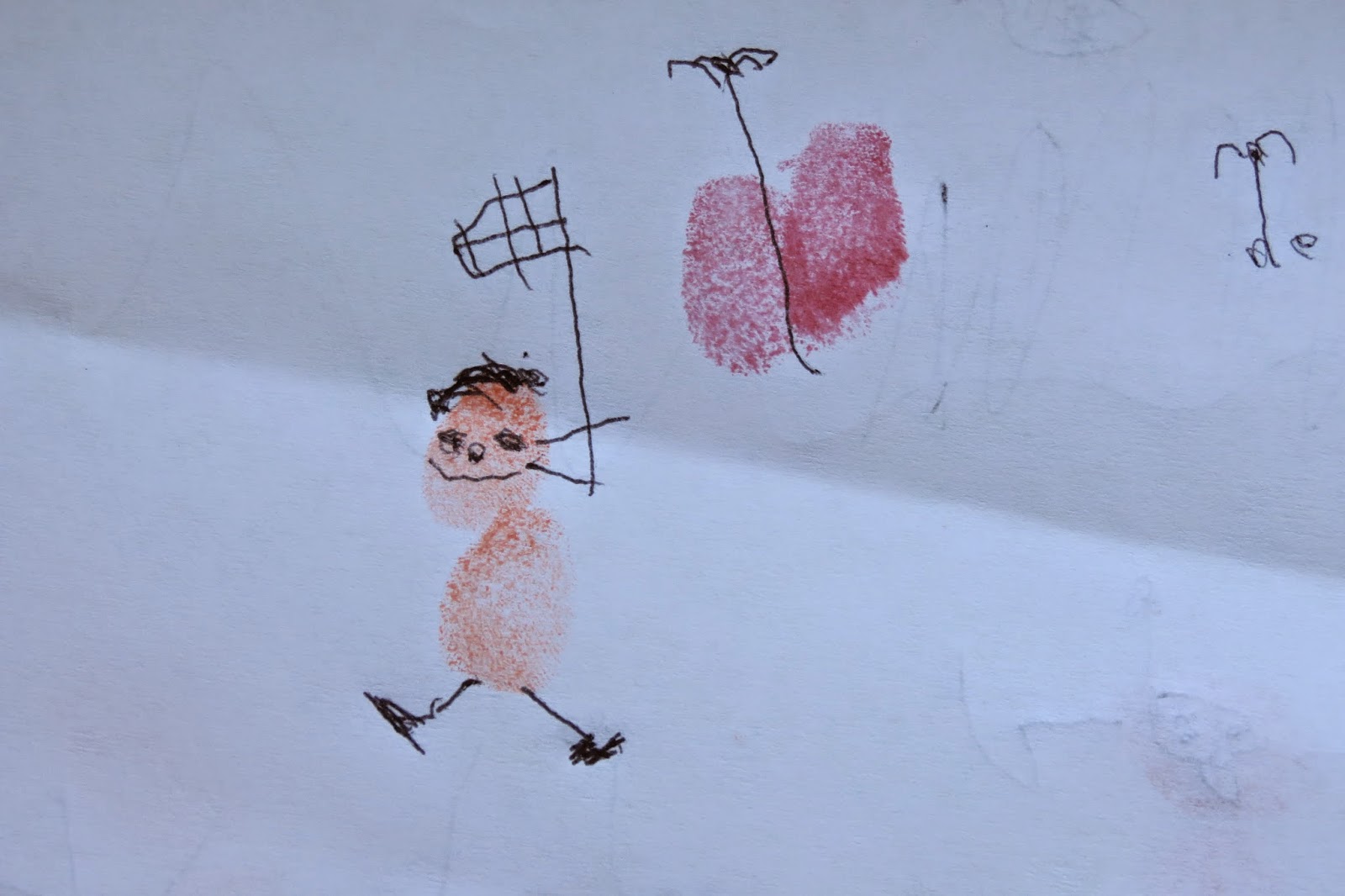 The other picture he loves to create is a farm, making the animals and the farmer (always with a hat and a pitchfork) with his fingerprints and coloring the rest in with crayons: 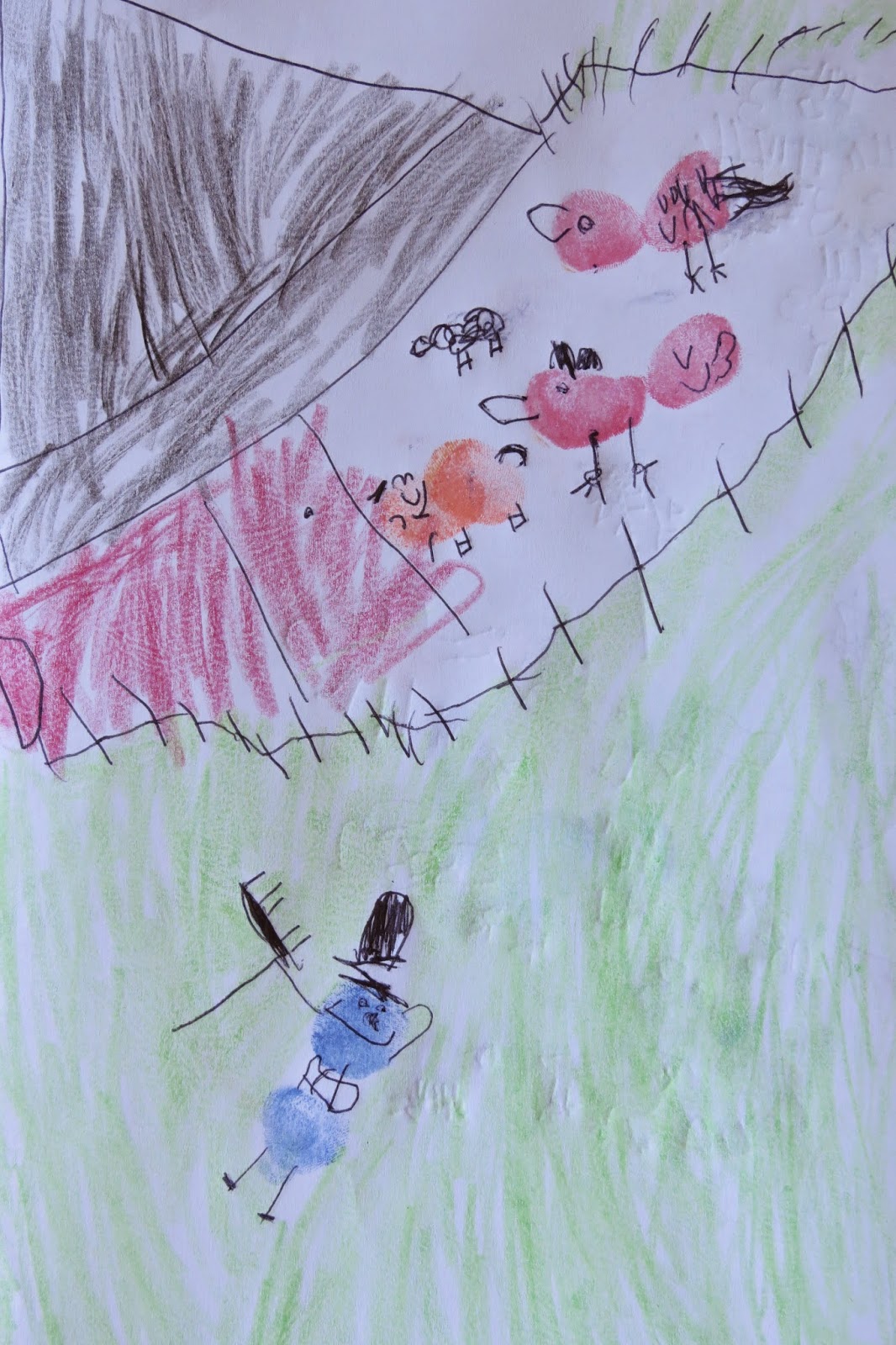 When he went to work with his Dad, this was one of the projects he chose to take with him.  I understand his fascination: 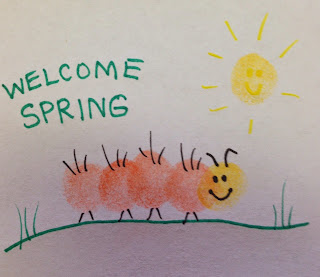 Tulips.
Ours surprised themselves (and us) by blooming this year --they bloom roughly every other year and this was officially their year off. 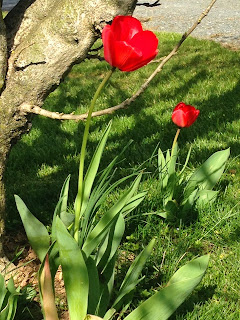 The Dandelion Deluge.
I looked out  my window when I was washing dishes (frantically! for by way of motivating me, a friend was racing me with her dishes in her house...) and saw my little people walking across the lawn, holding hands.
I stood there saying, "Awww..." because Tyler slowed his step to help his sister up onto the porch.  He handed her his fistful of dandelions when they reached the door and said,
"Tell Mommy, 'Here, these are for you!'"
They entered the kitchen and right on cue, she said, "Here, these are for you!"
"I actually picked them," Tyler told me confidentially, obviously pleased with their gift.
"And then I gave them to her to give to you."
It was one of those precious moments as a mom when I got to watch my son
be the perfect gentleman to his sister.
Wow.  If this is what dandelions do to 5-year-old boys, I love dandelions.
Plus, I love my dandelion bouquets. 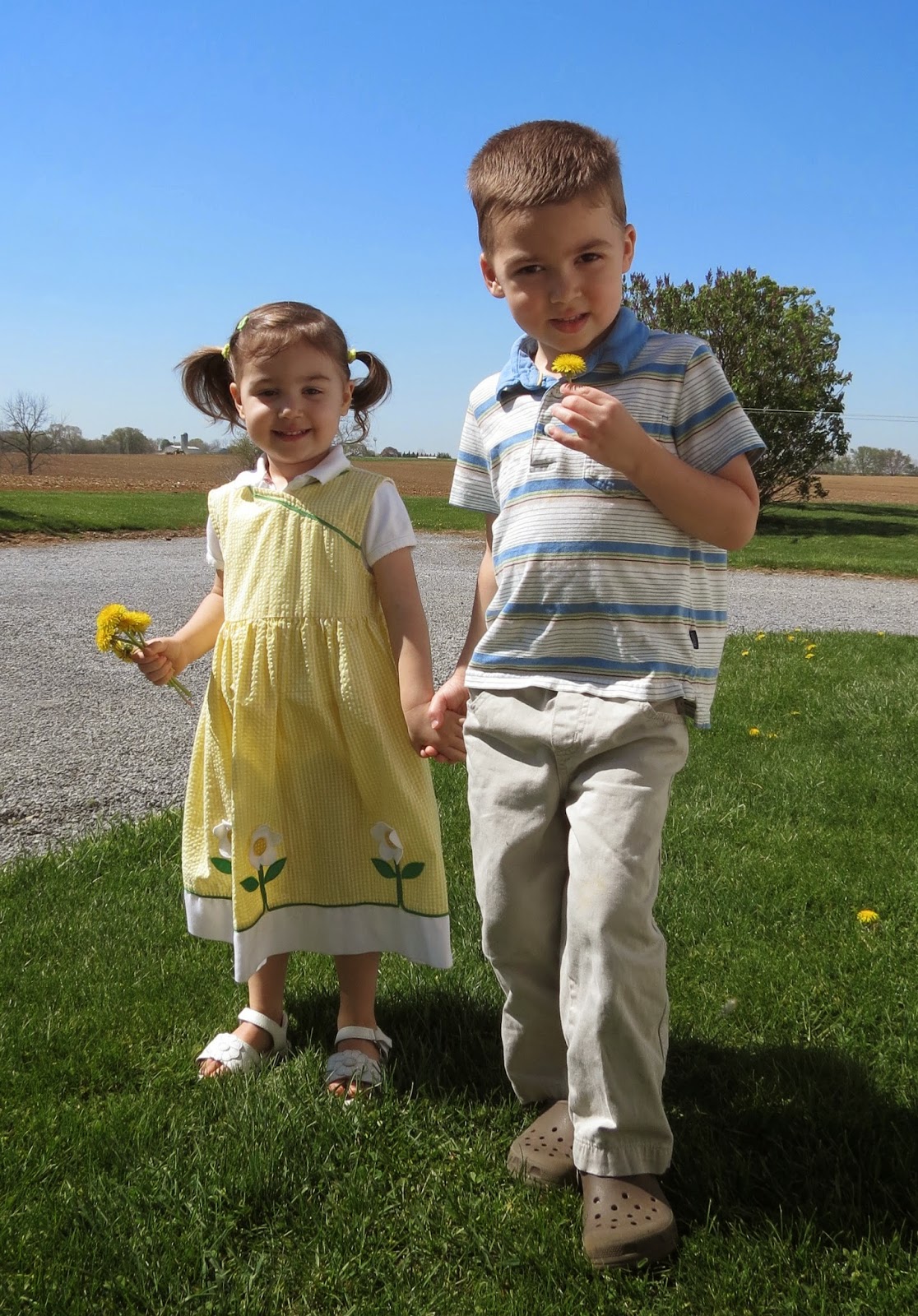 Produce Patches.
Fields are white everywhere but not unto harvest.  They are full of plastic. 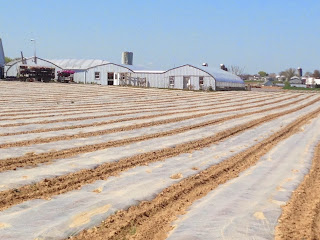 Roadside stands opening soon!
I've never read this in statistics anywhere, but I wouldn't be surprised if we live in the Roadside Stand Capital of the States.  Which is a privilege, considering we won't be having a garden this year. 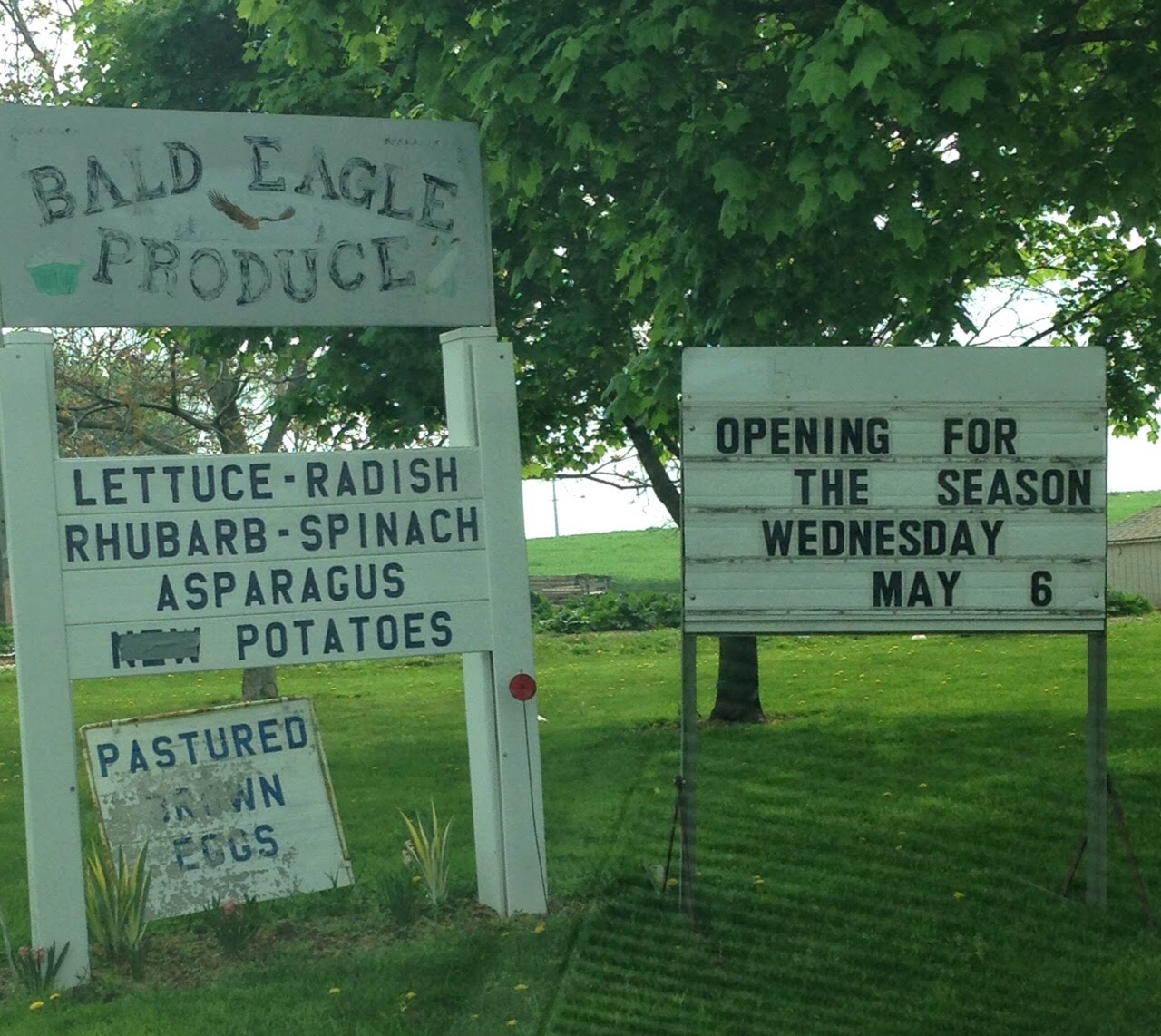 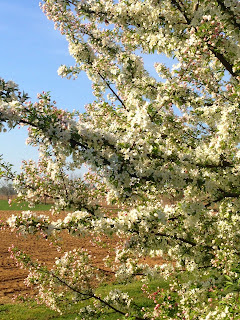 Fun at the Park.
Spring has been a bit delayed this year, but it is finally warm enough to thoroughly enjoy a park.  We took advantage of it this week and want to definitely go again soon...
maybe with some friends. 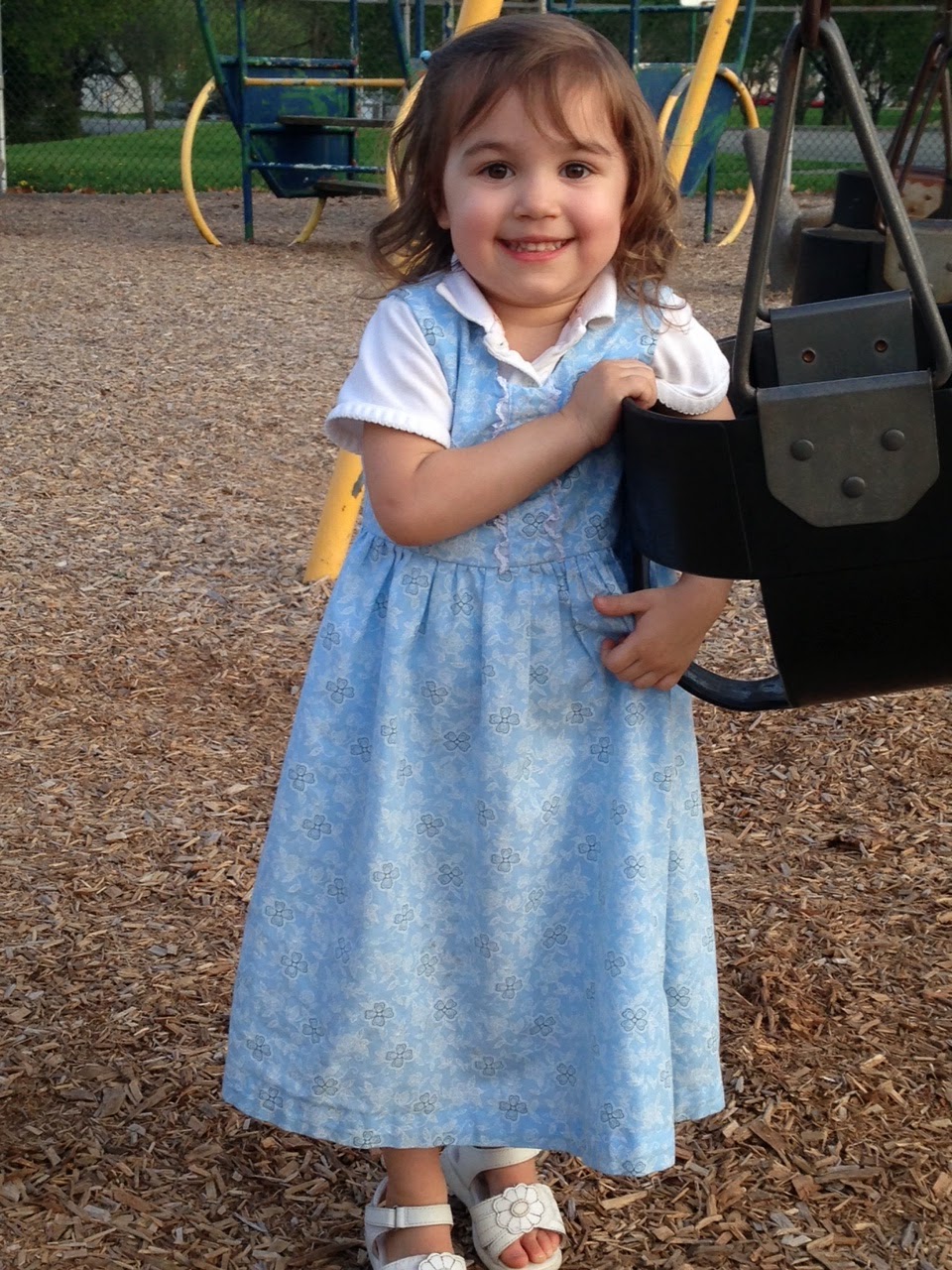 So tell me, what are your favorite signs of Spring?
Posted by Sara Nolt at 7:19 PM 3 comments: