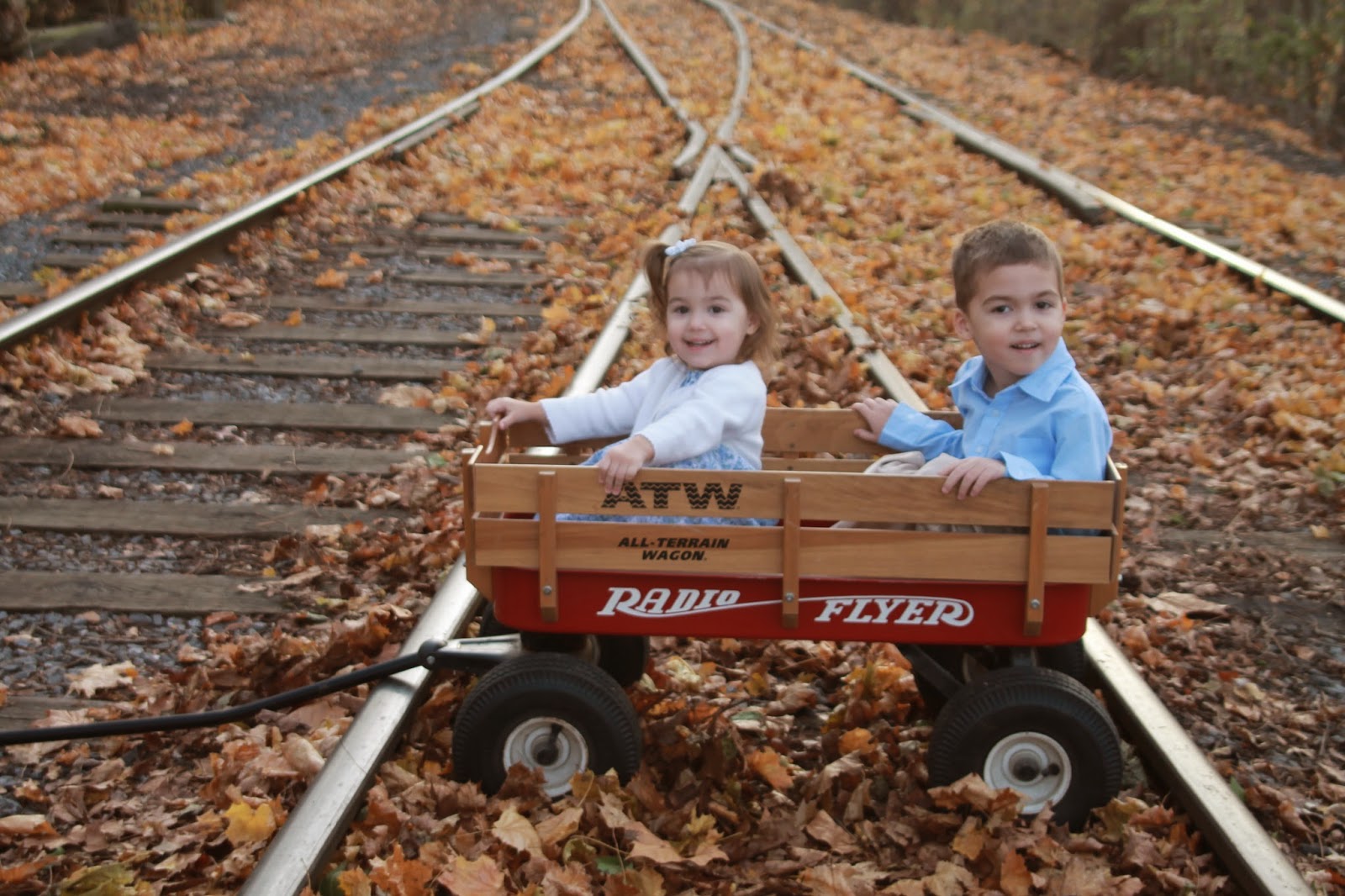 It isn't even December, folks, and I have two neat piles on my desk, one of family pictures, and one of envelopes.  I think this means I won't need to have my annual minor panic attack when I realize that the Christmas countdown is on and we haven't a single family picture to send out to all our friends and family. 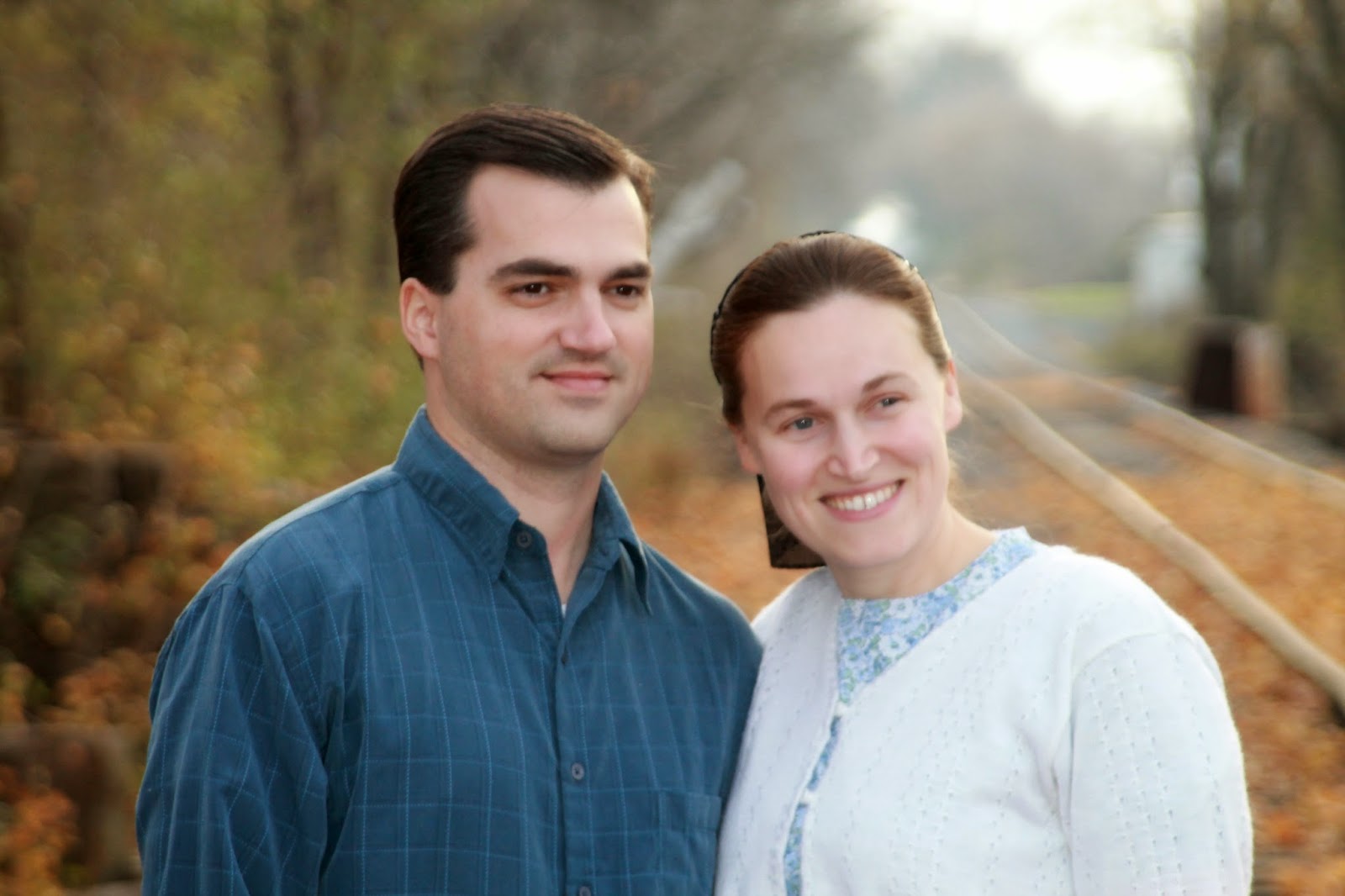 Last year (like most years before it) I wasn't so fortunate.  "It is cold now," I lamented to John in mid-December. "We missed our golden opportunity again."

We were down to three familiar Family Photo Options with which we are faced annually:
1) Take pictures outside in the cold with our noses glowing red as though we were distant relatives of Rudolph the Reindeer. (Been there done that --and ended up with black and white photos to try to mask our red noses.  I need to ask my mom how many generations back Rudolph is in our genealogy.)
2) Take an indoor picture.  Unfortunately, been there, done that, too, in spite of my love for outdoor pics.
or, 3 and my personal favorite) Go on Pinterest. Find a lovely and creative family photo with children about our children's ages and send that picture out with a note saying, "No, this isn't us. But this is a much better photo than we could come up with on our own..."

Well, this year we were fast heading towards the Pinterest Family Photo Option had not my photographer sister saved the day by saying:  "Hey, I saw a lovely place in Denver for family pictures.  And I saw a neat pose that would be adorable with your family.  I'll take your pictures for you..."

So we watched the weather until it changed from cold and colder to a mini heat wave when the thermometer actually pushed the fifties on a Sunday afternoon.  We grabbed the moment (thanks, Dawn) and got the pictures taken.  Fortunately, our actual photography sessions go pretty well (provided we aren't freezing into position when we do it) and are little stress when they actually take place. 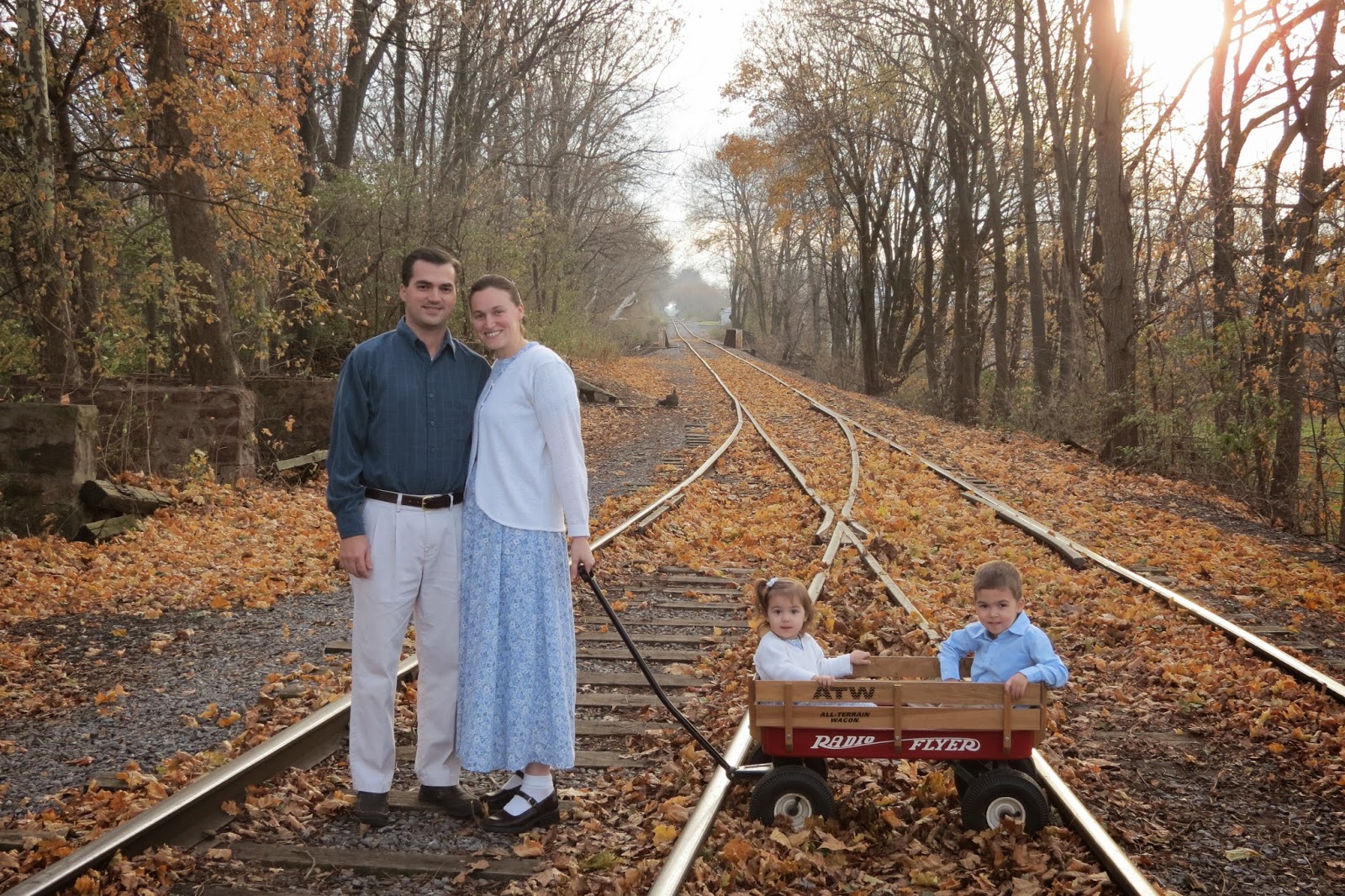 This means we have our pictures printed and waiting on the family update to be completed.  That is a sequence I'm entirely unfamiliar with and hardly know how to handle. 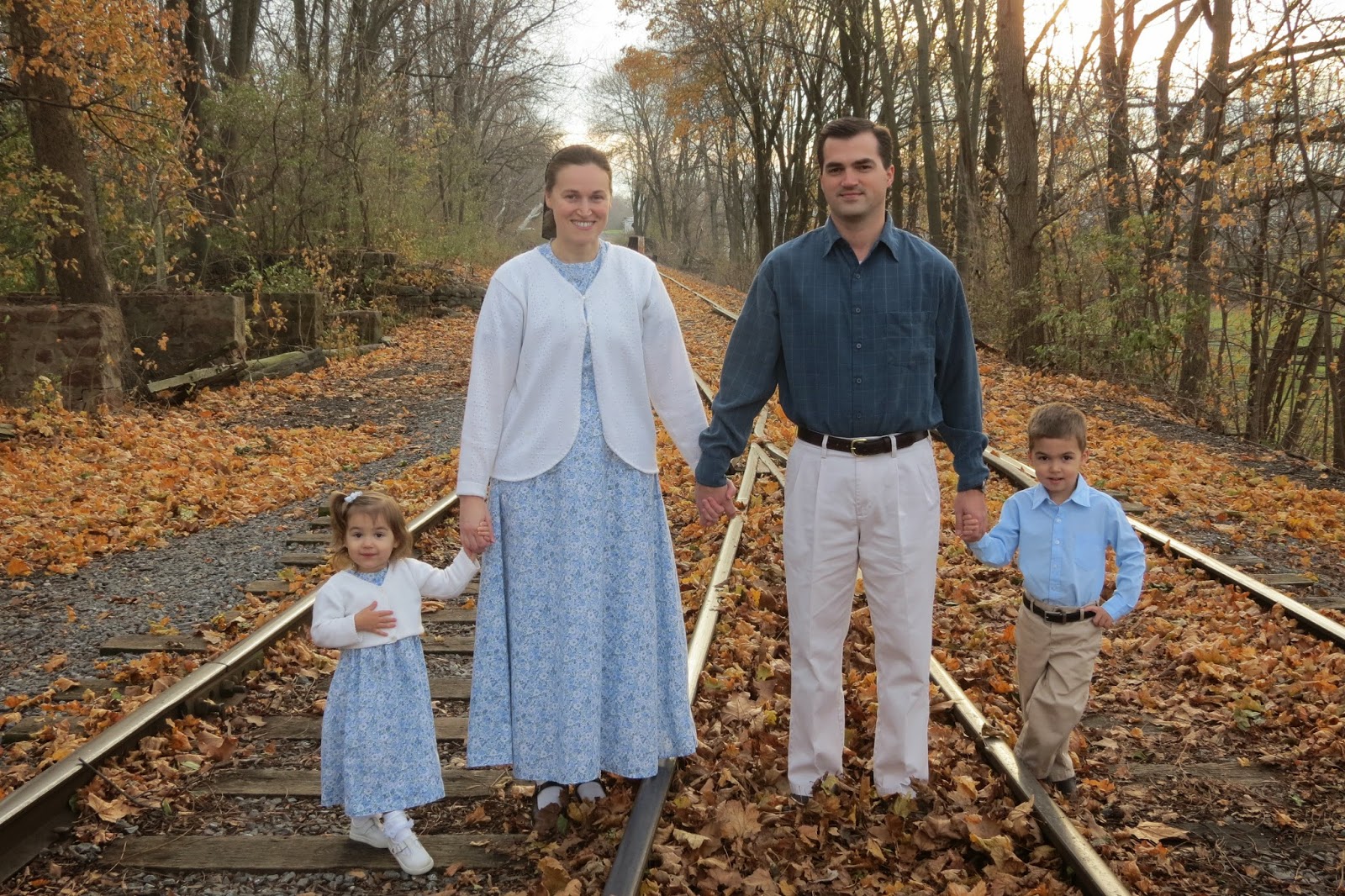 Hey, I caught you doing good! 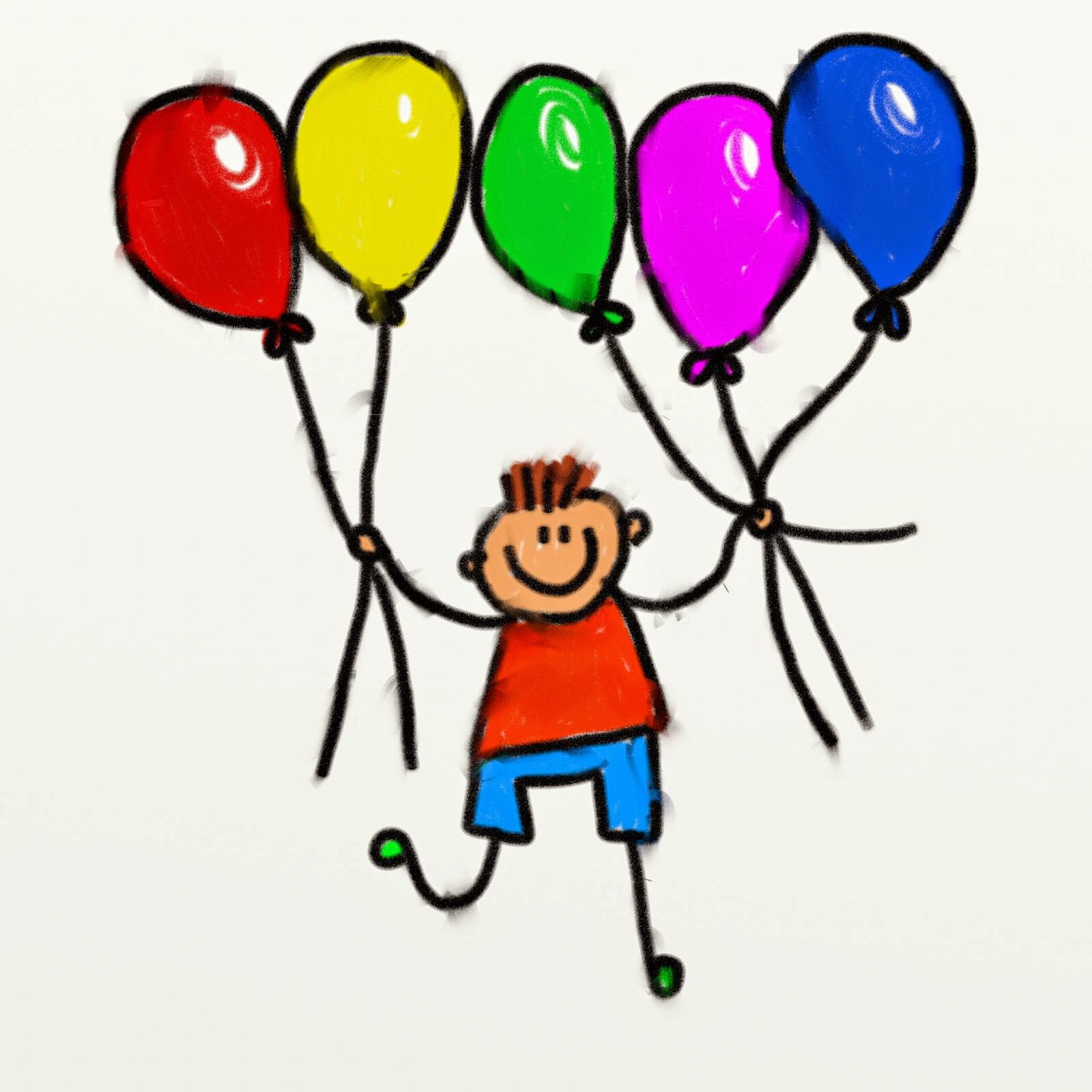 He might only be four, but he's learning it can be fun to do something nice for other people.  Recently he's gotten into "doing a blessing" for me.  At least once a day I'll hear, "Look, Mom! I'm doing a blessing for you. Am I your blessing boy?"

And he'll be wiping up some water he spilled or he'll sneak quietly up beside me and toss a pair of socks in my lap after noticing I have "no socks and cold feet".  A blessing boy indeed.

I'm glad, then, that I was reminded recently about The Blessing Book idea.  "Catch your children doing something good and record it in your family's Blessing Book," Paul Lloyd said during our Saturday morning parenting classes. "Pull out the book on birthdays and read to the birthday child all the ways they were a blessing that year."

I absolutely love the idea.  Hopefully I can remember to keep this up for the next twenty years until my children are grown and recording blessings of their own offspring.  What a neat collection and what a great way to fill a child with positive feedback and praise!
Posted by Sara Nolt at 7:35 AM 1 comment:

Some of my favorite kiddie quotes:

1. "Mom, can I break out our windows?  I'm a fireman."  My sister looked down at her son to see him standing there with a hatchet.  Hey, at least he asked first!

2. And speaking of axes:  "Mom, why do doctors use axes to check reflexes?"  We got him a doctor's kit, taught him the basic uses of the instruments, but apparently need to work on terminology next.

3. It was a mini astronomy lesson, thanks to a child's encyclopedia and a page full of planets.
"This is Earth," I told him. "This is where we live."
"Oh." He eyeballed the remainder of the prettily colored planets.
"Which planet does Grandpa Hoover live on?"

I love little people's speech.  Their description for life's issues are priceless:

4.  "My nose is all tangled up."  Yeah, mine gets that way too during a really bad head cold like he had.

5.  And ever feel just really miserable?  Like, inside and out?  My son has and summed it up by saying, "I'm hot, cold, and tired."

Communicating with a child

My son was listening to music the other day and asked, "Why are they singing about one box of kitty fur?"  They weren't.  While I realize that songs can be easy to misunderstand, "one box of kitty fur" wasn't particularly close to the original ("I've never seen the many thrills and sights unfurled.")

With that in mind, it is no wonder I need to repeat myself sometimes.  Twice.  It usually works best to simplify things with one or two basic commands to make things unmistakably clear. Sound familiar?

Because I'm a child myself and that is how my Father deals with me.  Only He never grows weary of repeating things when I'm not getting it.  Life's complexities can be too hard to wrap my mind around, so He simplifies things.  Like this week when He gave me two basic things to focus on: Pray in every situation, and Jesus is the answer to everything.

When the children are into each other and I don't know how to handle it He says,
"Pray, I am Wisdom."

When my heart is restless or I'm uptight about something He says,
"Pray.  I am Peace."

When I am tempted to be discouraged, He says,
"Pray.  I am both Hope and Joy."

In the middle of a temptation to sin He says,
"Pray. I am Power to overcome."

And if I fail to pray and fall into wrong attitudes and sin, He says,
"Pray.  I am Forgiveness."

I need a Parent Who can clearly communicate with me. He knows how to eliminate conversations like we had at the table a few weeks ago:

Communication.  I'll get it right someday because I can pray.  He is both the perfect Communicator and Teacher.

God knew how much I love a child's imagination.

Even before I was a mom, I'd laugh until I ached over other people's children and their incurable imaginations.
God knew that and providentially gave me a child with an imagination as big as the sky.
And I absolutely love it.

I knew my son had a world-class imagination
when he was still an only child and brought an airplane to me with a scowl on his face.  In his limited speech he told me,
"Tyler grab! Tyler grab a airplane.  I say NO!"
Oh boy.
So we had sibling rivalry with an only child and his imaginary friend.
It happened three times in a row.
The airplane got put on the counter "until you boys can play sweetly with each other."

It got better and better from there.
Storybook pages come to life in  my living room.
Yesterday it was a yardstick with a shirt on it slung over his shoulder.
The shirt was hay, the yardstick his pitchfork, and he was Old John Skipton going to feed Bonny, the horse, with James Herriot.

My shopping cart has been a trash truck or a cable car for years.
So has our bed.

But there's more.  More so precious it hurts.
So imaginative I hug myself and write cute things he's doing on my ever growing list of things that bring me joy. I kiss his cheeks -crumpets, his dad calls them- and tell him how special he is to me.

And I take pictures, trying to impress these golden days in my memory forever.
Lots of pictures.  He loves looking at them, too.
One day when he's grown past the stage of falling out of a wash basket boat with diving gear on, we'll look at the pictures together and laugh until our sides ache.

One day he's a diver, complete with an oxygen mask and tank on his back, goggles, and an underwater camera (yes, he thrashes his way across the floor, photographing sharks and whales and things). 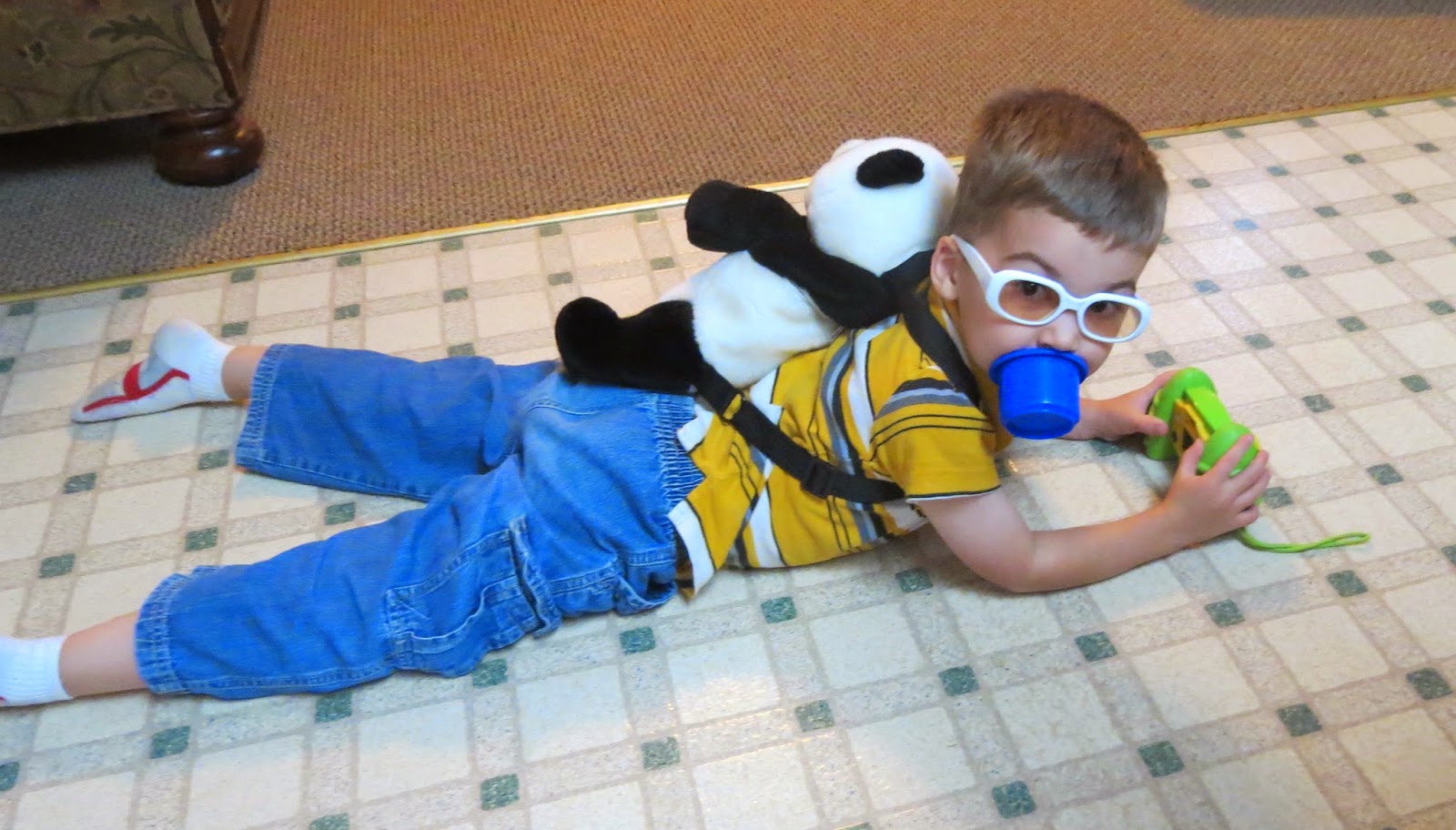 Diving is more fun with a friend.
(By the way, he wanted to take his frog and get-up out into the grass. I nixed the idea because it was wet outside and I didn't want to have a wet, muddy frog in my house afterwards.  In retrospect, I probably saved our house when I told him no as I can imagine our very proper landlord coming over with an eviction notice had he seen this apparatus thrashing its way across the front lawn.) 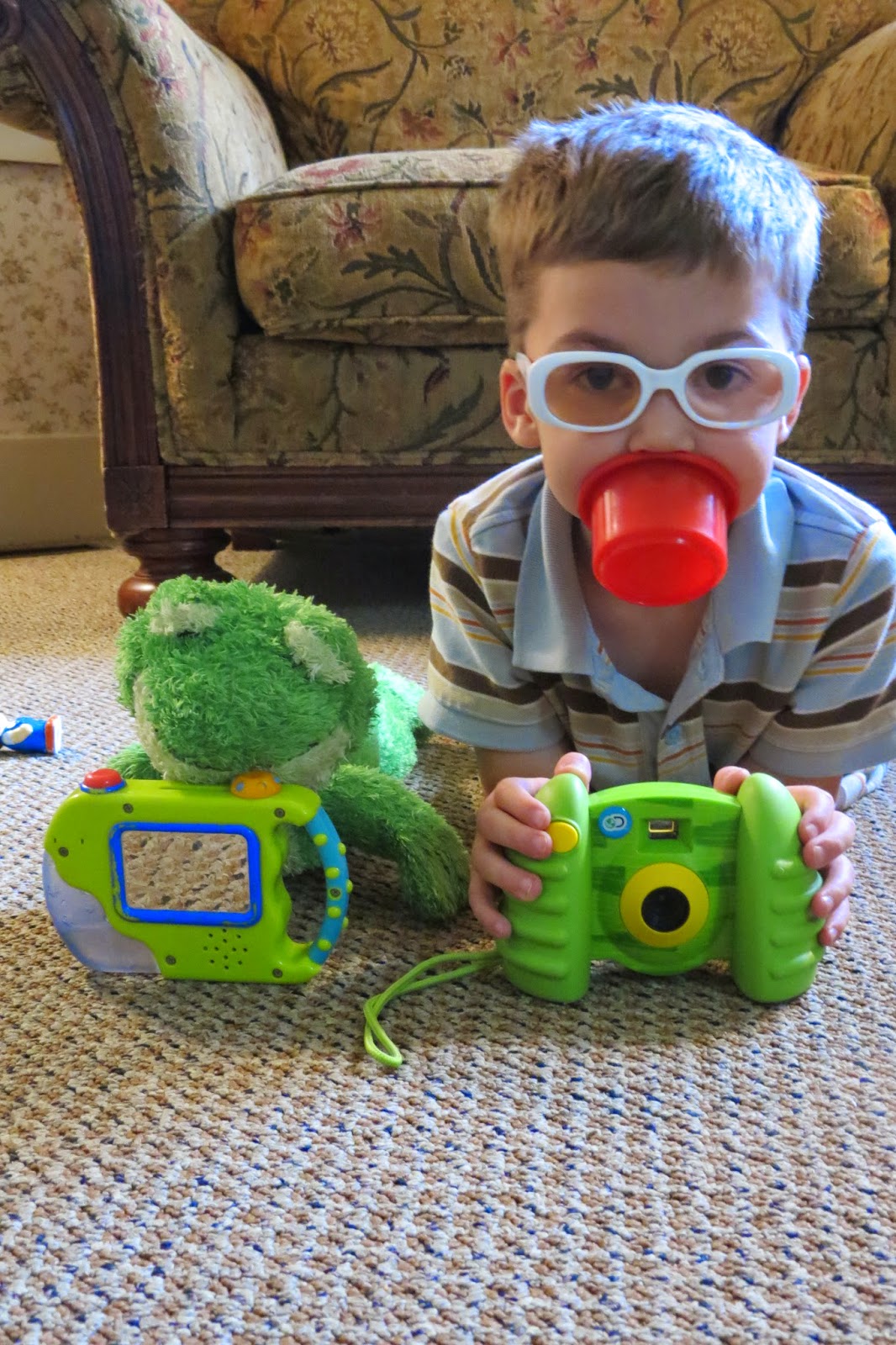 They stayed inside and went boating instead. 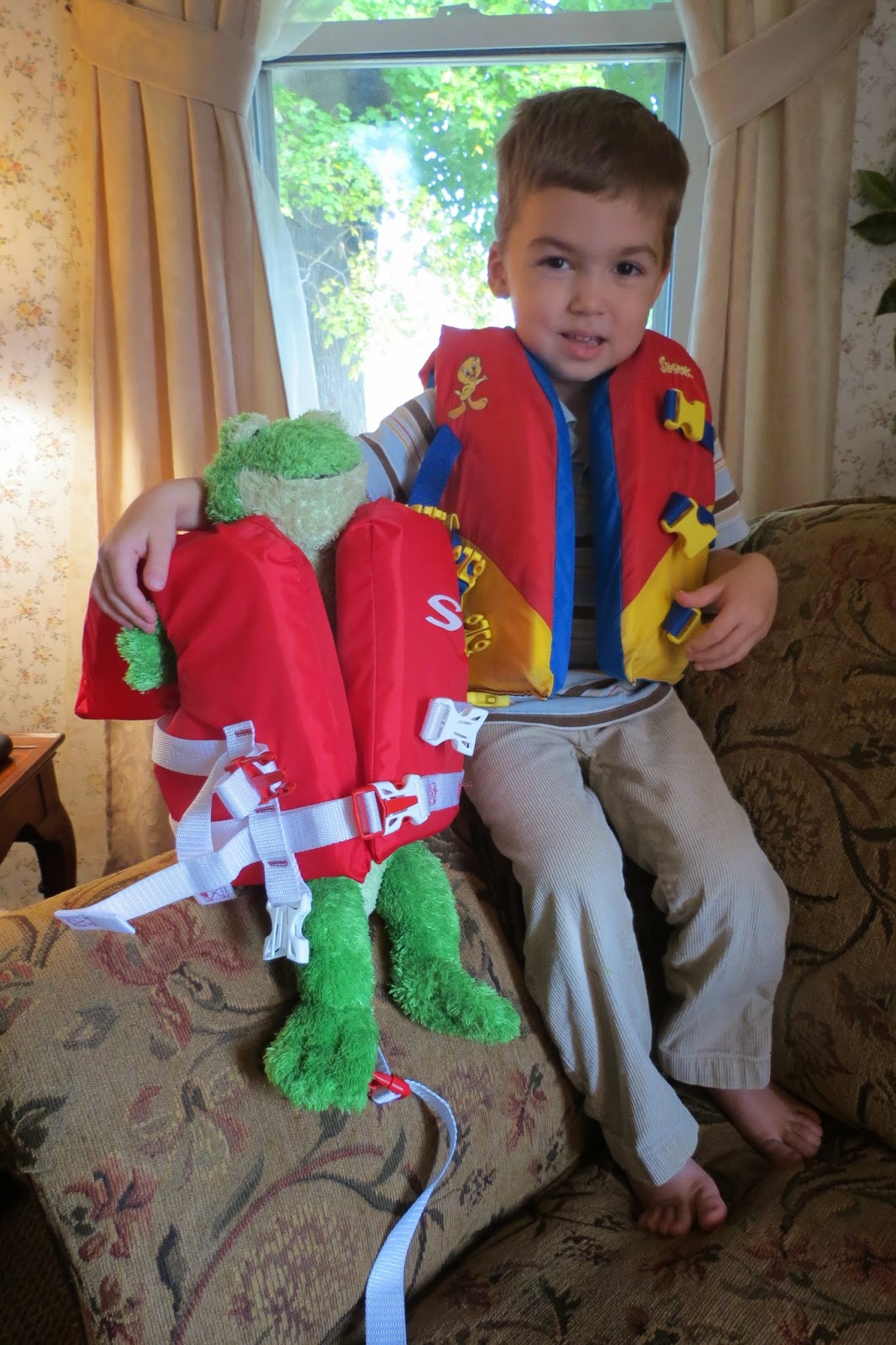 He makes a great astronaut standing on the moon with his space helmet and oxygen tanks.  "I'm climbing into my honeymoon," he said, "and am going to the planet." 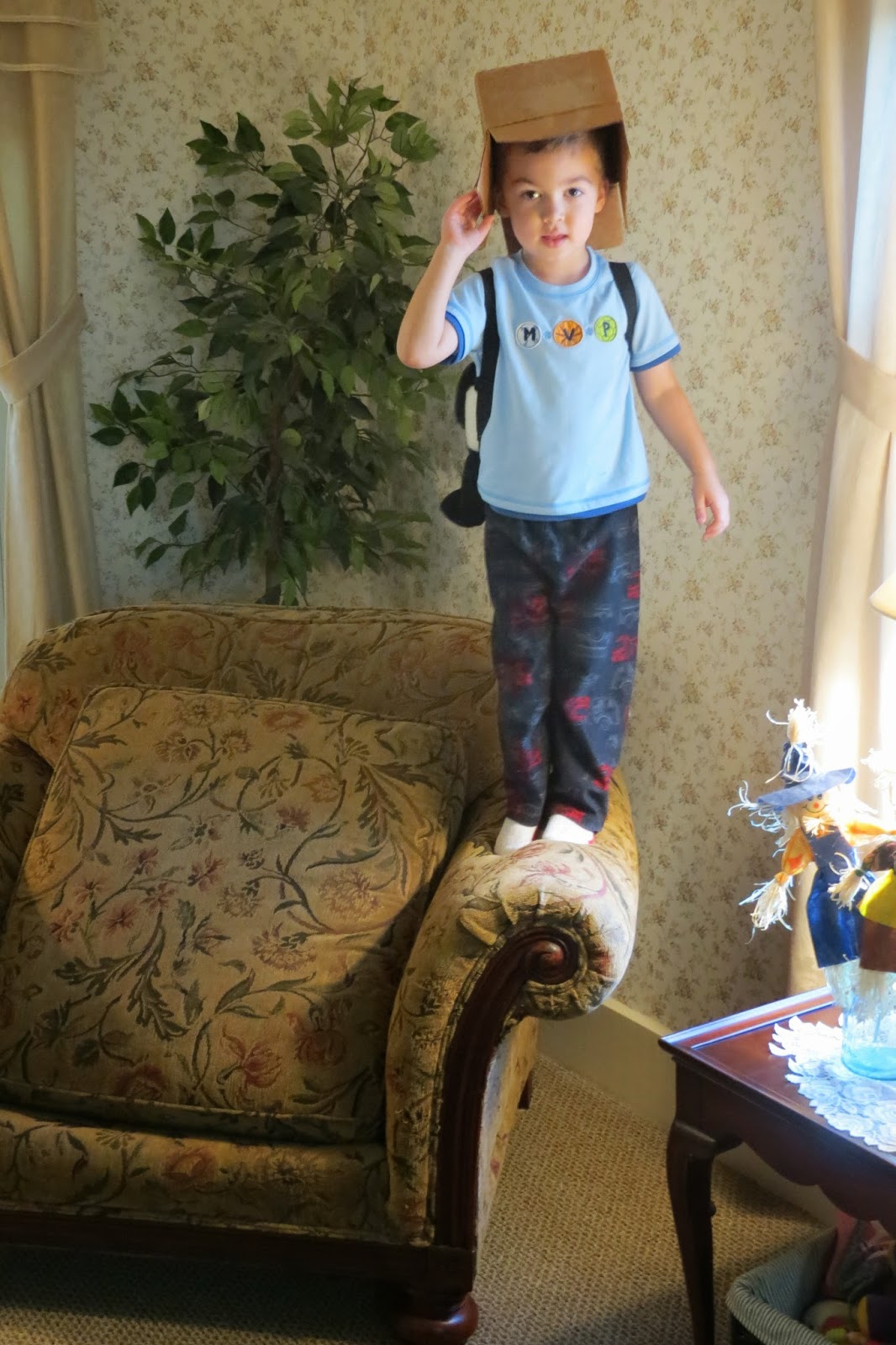 His original spacesuit. This one was limiting in that he couldn't see where he was going and had to walk really slow. 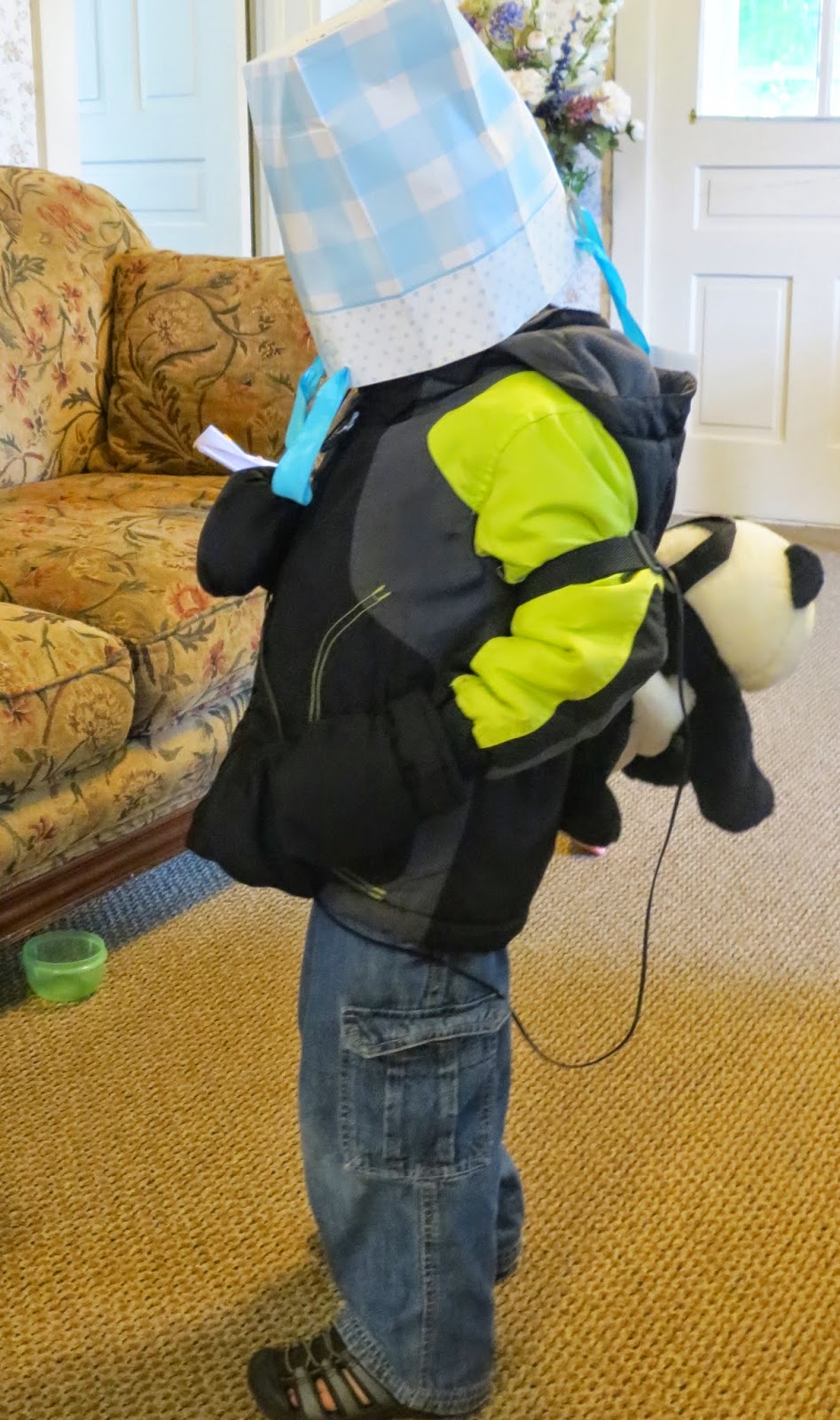 One day he got to use a real hose to help his dad wash off a real "firetruck".  A real hose that sprays real water sure beat my vacuum attachment which generally is pressed into service as a fire hose!   And, no, I still don't know how he manages to keep his oxygen mask sucked on so well. 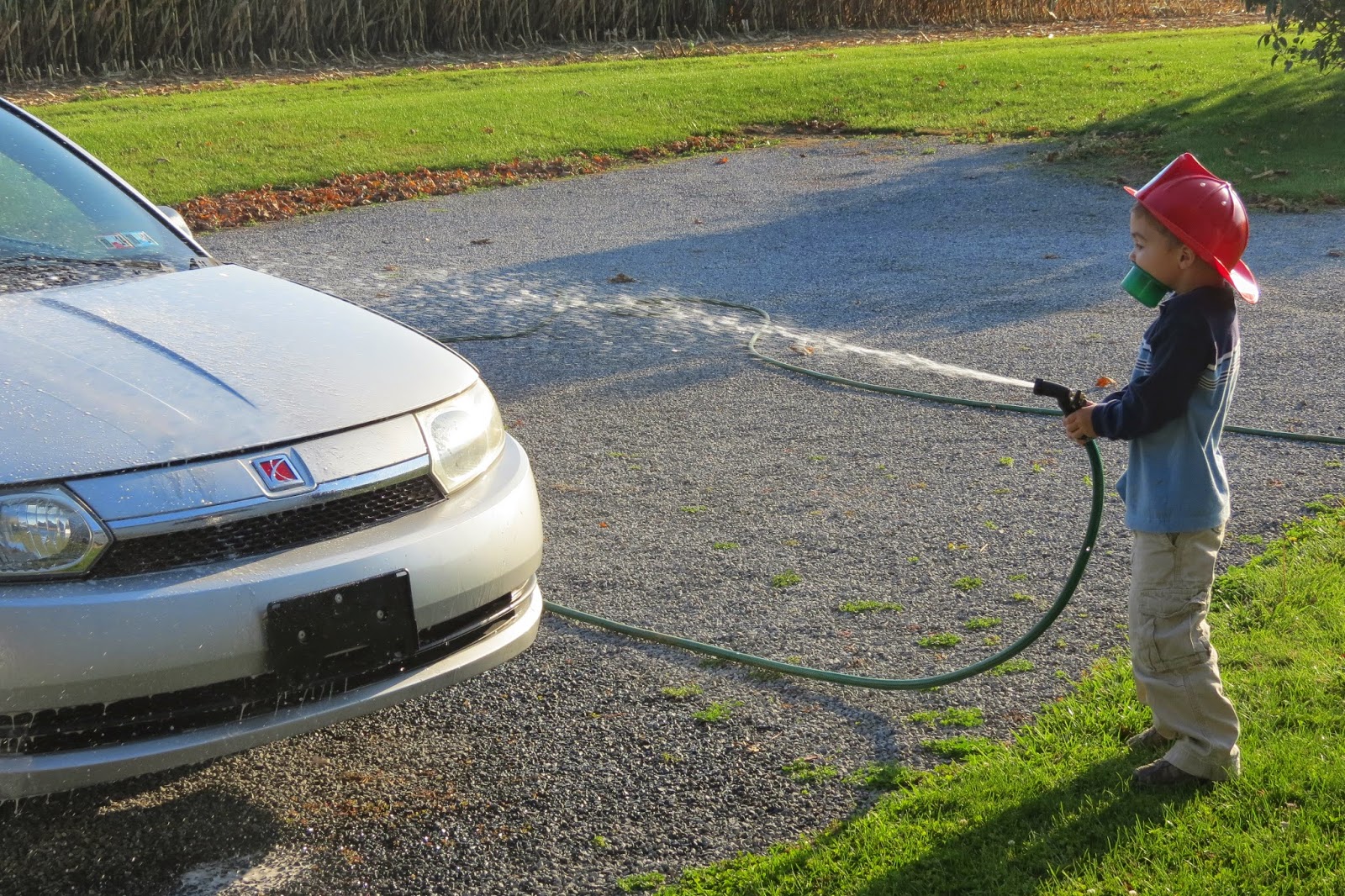 A pilot like Daddy.  Only Daddy's briefcase is black and this little guy's is blue. 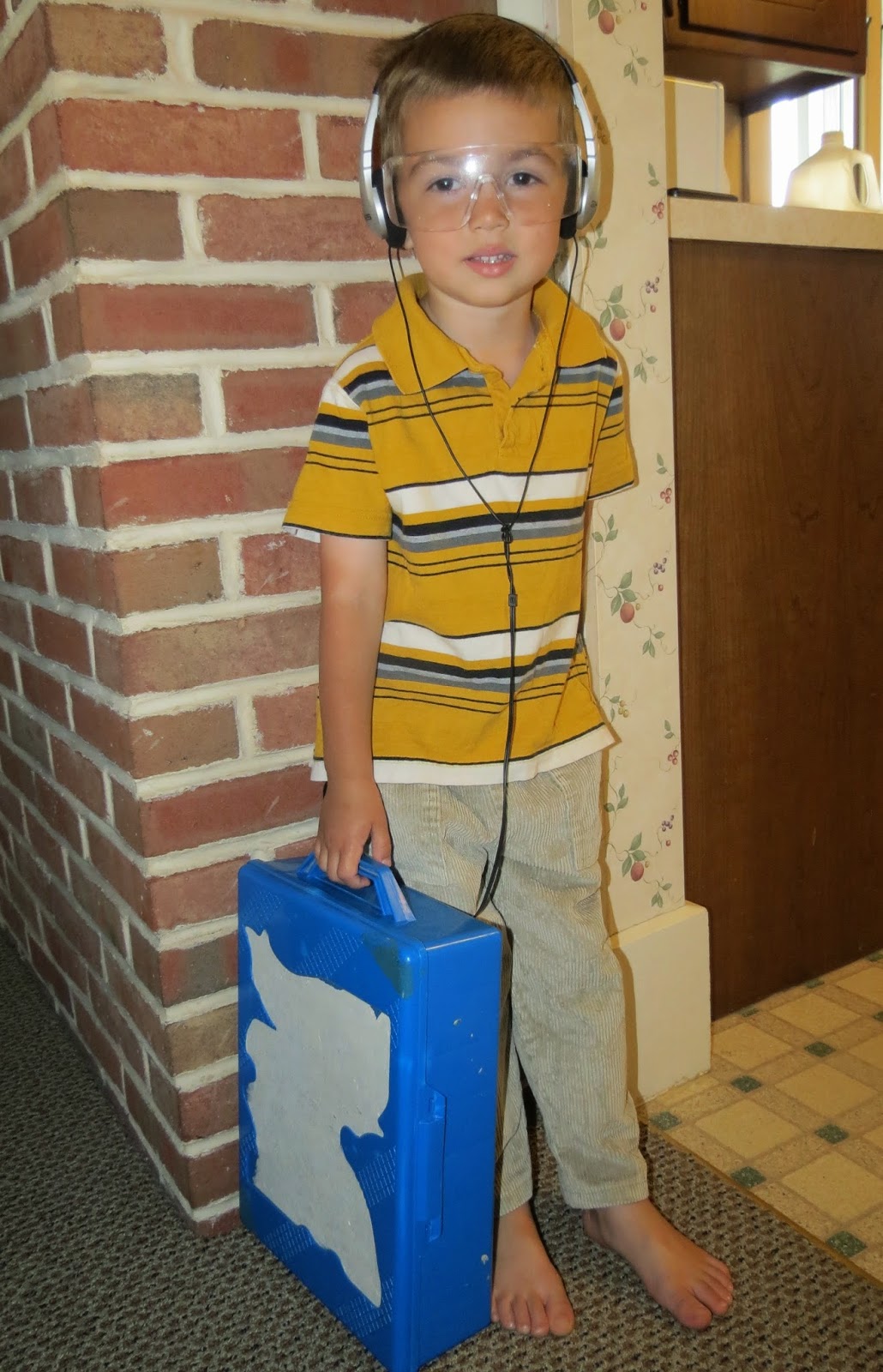