And how good it is. I do not understand the mind of a computer, so I had no idea what to do when it refused me entrance on my blog. Blocked from my own blog? Seriously? Just when I decided that my account had been hacked and I was banned entrance forever, I thought to pray about it. And within a day, my husband did some troubleshooting for me (again), changed a setting somewhere, and I’m back in business. It truly helps to pray. And it also helps to have an avenue like my kind husband whom God can use in situations like this.

Here are a few things that happened during my silence:

Motorcycles in Accra do not follow the same traffic guidelines as vehicles. Red lights and toll do not apply to cyclists. Also, a moto (as they are called here) is much faster than a car since they drive between the two lanes of traffic on four-lane roads. John uses our moto a lot and loves how easy it is to park in the city, how little fuel it uses, and how fast it is in comparison to a car.

I definitely don’t spend time thinking about all the nasty possibilities of what could happen to my husband on a moto in town. Potential for disaster is high. One thing I never worried about was him getting hit by one while on foot. John was walking across a highway between stopped traffic (pedestrians do this all the time) when a moto left the right shoulder, dodged between traffic, and hit John. Fortunately no one can go very fast when doing maneuvers like that, so no major damage was done, except to John's trousers which were shredded by the moto.

I was very grateful for God's protection, but shaken, and told our six-year-old he needs to thank God his Daddy didn’t break a leg or (worse-case scenario) get killed. His eyes reflected my horror and he said immediately, “THEN who would pay the taxes?”

John laughs, knowing Tyler’s love for his dad is far deeper than having some nice guy around to pay taxes. The two are great friends. But I didn't get it. Apparently I know as little about little boy thought processes as I do computer brains.

We hosted the Nate Gray family for a week and half over the birth of their son. I hadn’t ever hosted a family for that long before and was a little nervous they’d be so tired of us (and my cooking) that they’d never want to see our family again. But they are wonderful people, very gracious and kind, and we parted as friends. (At least I think so. We still like them, anyway!)

My children thought live-in play mates was the best thing ever: 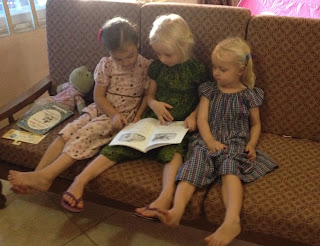 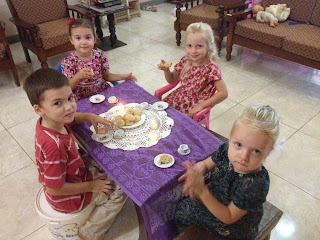 And I couldn’t get enough of little Nicholas. It was precious to get to snuggle a newborn just a couple of days before our own baby would have been due had I not miscarried earlier this year. 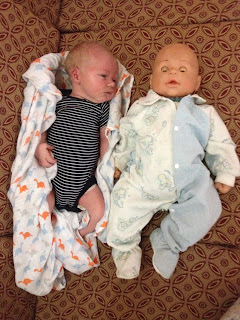 Hosting is probably the favorite part of our job, so we were glad to have the Aaron Ulrich family with us for a few days. My children had so much fun with a little "brother" that we volunteered to keep him, an offer that was rejected before it was even considered. 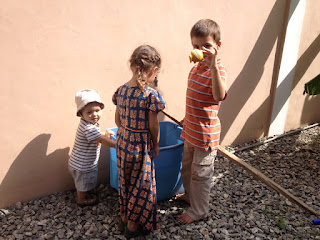 When John returned from an errand last week, he dropped his backpack on the couch and said, “Guess what I did?”

“Nope. Sat in traffic. It was so backed up that I turned around a couple miles from here and came back home."

Sometimes traffic is jammed up for no apparent reason, but this time John was able to see the cause of the problem. A semi carrying bags of cement lost its brakes and plowed into cars and street vendors. Eleven vehicles were involved and there were multiple deaths, though we never heard a final tally. We often see nasty accidents and are truly grateful for God protecting us in the many hours we have spent on the road. 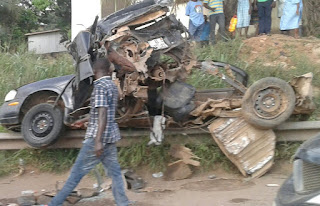 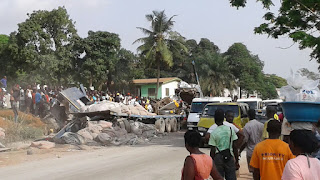 Our electric company installed a pre-paid meter. We aren’t exactly excited about the change since we’ll have to keep an eye on how much money is left in our account lest we run out at an inopportune time. The only way to refill the meter is to go in person with cash to the ECG office. The best part about the new meter was seeing Tyler outside with the electricians, wearing his Li’l Tykes hard hat. 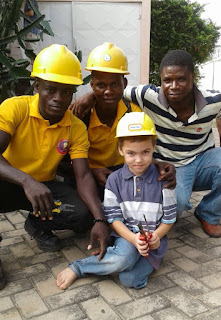 And that is a fast overview of our life in the last few weeks. We are happy and blessed and so grateful to be in the service of our King.
Posted by Sara Nolt at 7:50 AM 1 comment: